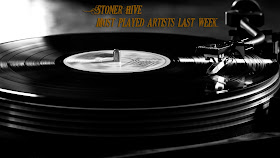 G’morning y’all. Another Monday and another week passed. It has been a hectic one with loads of travelling. But on the road we had great company. Remember the Reed: Chapter One album from 2014 by Polish quintet Sautrus? Well,  they are now following that amazing album up with something that might even be grander. It’s called Anthony Hill and we have not been able to put it down since they sent it our way. Be ready! Psychoriffadelia, by Geezer was on last week and still continues to spin, just like No Waves, Just Sharks by The Mad Doctors. Back on heavy rotation is Automatic Sam, their album Arcs from a few months ago still becomes better with every spin. Amazing! Hawkwind, ye olde legends, are back once again. And we definitely appreciated their The Machine Stops album from 2016, so we had to check out the new one called Into The Woods. So far, it has nog gotten into our heads like the Hawkwind did before. But who knows, it might happen after more spins… And since a new week has started, new spins will always be there. Cause we are addicted! Aren't you? Heavy junkies unite!