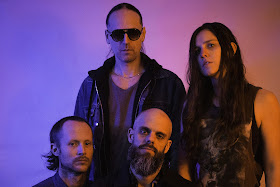 We continue along the kaleidoscopic Baroness journey that begun so many years ago with that magical Red album. Apparently the new Gold & Grey album was supposed to be called Orange, but he wasn’t feeling that color. And yes, Gold & Grey does alliterate nicely, so I guess we can agree with the decision. And shit, we have no say in that matter anyway… We were already jotting down these few lines about the new Baroness record when Madman Tony Maim sent in his screed about Gold & Grey and we of course stopped writing immediately, cause why do another mention about the same album. There is so much other great music out there and so little time. But even though I agree with his rant, I missed something. Something I felt needed to be said. Gold & Grey feels like a continuation from Yellow & Green. Where the experimental side was perhaps bigger but the amount of different approaches to the tracks smaller. Influences are still too many to name and the dynamics are even grander. We even get an acoustic treatment and female vocals in the form of new guitarist Gina Gleason. And the feeling we are listening to one big work of art is even more present due to all the bridges and themes connection the songs. But it still could not grab me initially, it took some time, and the reason behind that fact, I fear, was the way the mix and production feels. And that feeling has not left me, even though the album has become a favorite, a record one can spin at all kinds of different moments, there is something amiss with the mix. The tracks and compositions have this fragile edge to it, while the mix goes through the ceiling in loudness and fullness, leaving no room for the instruments to move or the compositions to breathe. It is a strange feeling to listen to an album and wanting to love it so much but feel like it is a lot of work to do so. I would give a lot for a new version of this record, but shit, we have no say in that matter… 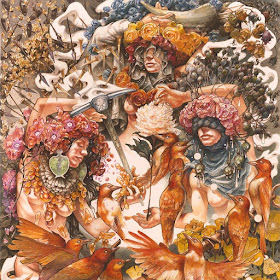